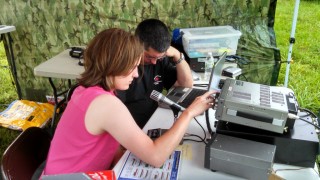 Hannah, KD5WNF, and Mike, AE5ZC, work on making another contact during Field Day 2014 operations of the Amateur Radio Club of the University of Arkansas. As per tradition, the club operated using the callsign K5GOE, which was previously the callsign of Dr. J.S. “Woody” Charlton (sk), long-time faculty advisor for the club.

The Amateur Radio Club of the University of Arkansas (ARCUA) Field Day 2014 event took place at the Botanical Gardens of the Ozarks in Fayetteville, Arkansas on June 28-29, 2014. This was our third year to conduct Field Day operations at the Botanical Gardens. Although we had to take a brief break due to lightning in the area during the event, the weather was generally much cooler than usual, which was a welcome change from recent years. As with last year, station power was provided by batteries and solar panels only.

While we opted to operate using “search-and-pounce” for much of the event, we had a number of students participate that had never done so before… which counts as a complete success from our viewpoint! 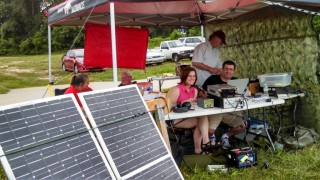 Another view of the ARCUA Field Day 2014 site in which the solar panels and battery are visible. At the operating table are Hannah, KD5WNF and Mike, AE5ZC. Standing just behind the table is ARCUA faculty advisor Larry, WJ5V. Behind the panels are ARCUA student president Jill, AC0MX and Robert, KC0GHY.

The radio contacts that we made during the event (a.k.a., “QSOs”)are summarized below.

(Total Contacts by Band and Mode)

Participants are listed alphabetically by callsign. Not everyone listed below operated; some assisted with setup or provided other auxiliary support. 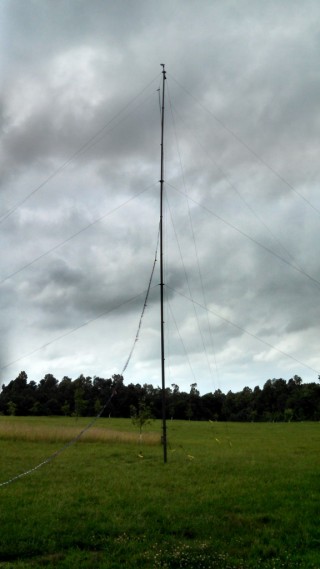 The Amateur Radio Club of the University of Arkansas Field Day 2014 antenna.

A big “Thank you!” to everyone that participated with/supported us and/or visited us during the event. Everyone had a great time, and we’re already looking forward to next year!