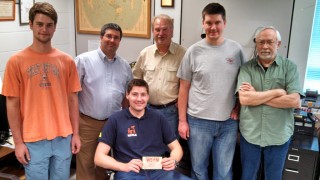 Georg Knoess, DK7LX, and Ron Evans, K5XK, stopped by to have lunch with ARCUA members on Wednesday, May 28, 2014. Georg, who is from Frankfurt, Germany, was in town to give a presentation for the Ozark Wireless Society on Saturday May 24th. During that presentation, he gave a show ‘n tell on ham radio in Europe and talked about many of the interesting places he’s operated from around the world. After having lunch with ARCUA members in the Arkansas Union Food Court, he was given a tour of the W5YM shack and shared more stories. Afterwards, Dr. Michael Glover, AE5ZC, gave Georg and Ron a tour of the High Density Electronics Center (HiDEC), located at the Engineering Research Center.

ARCUA wishes to thank Georg and Ron for stopping by… we enjoyed the opportunity to visit and had a blast!