So you’re looking at outfitting your station with Anderson PowerPoles? Great! Now the next question is “Where do I buy them online?” Ultimately you can buy them either from a smaller vendor such as PowerWerx, or a large parts distributor such as Mouser. Going with the smaller distributor can help when you’re in a hurry and not exactly sure which part you want, or what all the numbers and letters in the manufacturer’s part number mean. However, you do end up paying for this convenience. I’ve gone through three online stores to find out where the least expensive place to order parts, as well as delving into the cryptic Anderson catalog for which parts are needed.  All the prices that I’m quoting are from the Mouser online catalog with prices that were last checked mid-June 2014.

Overview:
Anderson PowerPoles are genderless, keyed power connectors. This means that as long as the connectors are oriented in the same way, you can connect them together. The use of colored shells, or hoods, allows for unambiguous polarity identification. Advanced features that are often unused include a wide range of plastic colors, the ability to create arbitrary-sized connectors, and an array of mounting options. Anderson PowerPoles are actually a range of products handling currents from 15A up to 180A per contact, with wire sizes ranging from 20 AWG to 3/0 AWG. The most commonly used connectors in amateur radio use are the PP15-PP45 range, which handles up to 45A continuous. Each contact consists of one plastic hood with a metal latch to hold the contact, and the actual metal contact. A standard 12V DC connector consists of one red hood and one black hood, and two metal contacts. This article focuses on acquiring parts in the PP15-PP45 range.

Contacts:
The other part of an Anderson PowerPole connector is the contact. This piece of metal is crimped or soldered to a wire, and is rated for different currents and wire gauges. For quantities under 50 on the 15A and 30A contacts, PowerWerx is a bit cheaper. This list also includes the 45A right-angle PCB contact, which we have found a special use for as well. It’s interesting to note that there isn’t a significant price difference between each current rating. The Mouser part for the 45A crimp contact is for the version with each contact connected on a strip of metal. This cuts the cost by over 50%, but if this is not convenient, the high current contact is also available in a “loose bulk” option for an added expense. 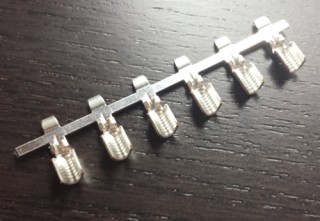 The 45A contacts can be just as inexpensive as the smaller 15A and 30A contacts. The only catch is that they must be individually separated from the reel they come on as seen above.

Bottom Line:
So what’s it going to set you back per contact? Well it depends on how many contacts you buy. Ignoring shipping, prices start in the $0.90 range, and can get below $0.60 in large quantities, as the table below shows. The most expensive part of each PowerPole connector is the actual plastic hoods themselves, although the PCB mount contacts are relatively expensive as well.